is a small tent designed specifically for your food when outdoors. Leaving food on the picnic table when out camping or on a picnic has been common place for as long as I can remember. As the Bar-B-Que is grilling away you spread all the condiments, chips and potato salad conveniently around the picnic table for easy access. No big deal, right? We’ll not according to Dan Rothwell, the owner and inventor of the Dura Tent.
After a lot of research, Dan discovered that the flies of today are actually more of a health risk then ever before. Scientist’s from several universities concluded in their studies that flies are showing a higher percentage of being carriers of  E. Coli and MRSA. Even more interesting, and something I was not aware of, is 100% of ALL flies carry a combination of over a million strains of bacteria. It only takes 100 of these spores to be deadly in youths and seniors. The rest of the population can become seriously ill through ingesting this bacteria.
When I first seen the Dura Tent I have to admit I had mixed emotions.
We have enough outdoor camping equipment to start a sporting goods store but is the Dura Tent something that I would  consider adding to our collection and then actually using it? My thinking was first a little narrow in the benefit’s of having a Dura Tent handy in some circumstances. I also believe that Dan’s selling point’s (from the videos anyway) on focusing mainly as a deterrent to flies may also be a little narrow. What about ant’s for instance? Have you ever been camping close to ant’s when they come marching in rows of hundreds at a time? That’s one time I really wish we had something to protect what was on the picnic table. There was no stopping them and all we could do is move the food out of their way until they finally retreated. Could the Dura Tent of held off such an invasion of ant’s? It would make one heck of a promotional video if it could. 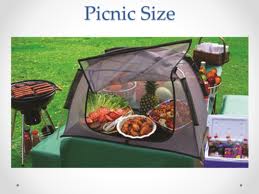 Another great selling point for the Dura Tent would be for food storage on extended outings. This may require two tents (another selling point) with one up on the picnic table and the other set up for bulk storage.
Have you ever been camping in Bear Country? The #1 rule is never keep food near your camp site at night. The best way is to tie your food up in a tree that the bears can’t reach. Well what if you took a DuraTent with a hard bottom and a few clips to stabilize the top. You could hoist all your food out of the bears reach but could easily lower it down when needed. O.K. maybe that’s getting a little carried away here, but it’s something to think about.
Probably the biggest market for the Dura Tent might be at Farmers Markets where food is displayed outside all day long. This is where the DuraTent can make a major mark, especially if the city codes were changed to require protection from the elements. Given the choice, I would definitely buy from the vendor that the has the food covered compared to the one who doesn’t.
The more I think about it, the more ideas I seem to come up with why you would want to own a small tent. Geese, you’d think I’m the one selling these things, but I’m not. It’s just a product that I personally would buy and will find many other uses for other then just keeping the food safe from flies.
So how will the Dura Tent and  Dan Rothwell do in the Shark Tank?
The small Dura Tent retails for only $20 which seems like a really good deal especially considering how well it appears to be made. There clearly is a demand for an easy and convenient way to keep critters off our food when outdoors and this sure looks like the best alternative that I have ever seen.
It most likely will come down to the numbers and the valuation of the Dura Tent Business. This particular market (as a whole) has not been given much attention on the Shark Tank Show so I’m not even sure if this will fit into any of the Sharks specialized business interests (sporting goods). My idea to get on the Shark Tank falls within this market so I will be most interested to see how all the Sharks react to this product and what value they might add to the deal.

On the other hand I can almost hear Kevin O’Leary saying why can’t he just start his own mini tent business? You can’t patent the idea (or can you?) and any tent manufacture could make their own version if the market warrants it. It will then come down to Branding the Dura Tent Business as the perfect choice in mini tent’s. Something that Dura Tent already appears to be doing very well.